Posted by Jeff Wahl on 8/31/2020 to Well Water Quality
Over the past 20 years working as a certified water professional, I have observed many rural water scenarios with adverse water quality. Three recent experiences have highlighted the need for improved water testing and awareness of potential contaminants in rural areas of the country. The absence of odour, colour, or bacterial contamination does not indicate that water is safe and in accordance with the Canadian Drinking Water Quality Guidelines. (CDWQG)

TDS is measured in PPM (parts per million) or mg/L, and consists of inorganic salts and small amounts of organic matter that are dissolved in water. This usually consists of  calcium, magnesium, sodium, potassium, carbonates, bicarbonates, chlorides, sulphates and nitrates. They are found in drilled or dug wells and can be influenced where agriculture practices are predominant.
Experience #1 - Big City to Small Town Living
I was contacted by a couple who moved from the city into a small community located on Manitoulin Island, in a rural subdivision of approximately sixty homes. All of these homes had water supplied by drilled wells, and each had a septic system for waste piping collection. There was a bacterial analysis for coliform and e.Coli performed as part of the house purchase, but no additional testing was conducted beyond that, as the result was negative for bacteria at the time of the sale. No water treatment equipment was present in the home when they moved in. However, the customers were concerned. Additional water sampling was conducted and it was determined that the total dissolved solids (TDS) level in the water was 1250 ppm which was mostly a result of the 54 grains of hardness present in the water as well. Both of these values greatly exceed the recommended level outlined in the CDWQG. The couple ended up purchasing water treatment equipment to properly treat the water. The addition of water treatment to the home was an unexpected expense, and one that was fully undisclosed to them prior to moving in.
Experience #2 - Purchasing in Advance
In a completely separate situation, a homeowner was referred to me by an HVAC company who did not have the credentials to install water softeners. The customer was looking to have an existing softener that was pre-purchased installed at their waterfront property, which had a drilled well as the water source. As part of the correct process, I insisted on testing the water to ensure that the softener would be set up correctly before installation. The customer was shocked when the water contained 64 grains of hardness and 1460 ppm of TDS, as determined by the full water analysis conducted. The water softener purchased was too small in capacity and would have to regenerate frequently to maintain water softness as there are five people living in the home. In order to be efficient, the softener should have been three times larger in size. The smaller unit would not be very economical and use excessive amounts of water and salt. Upon learning about the water test results, the customer indicated it would have been “smarter to have had the water tested before selecting a system”. 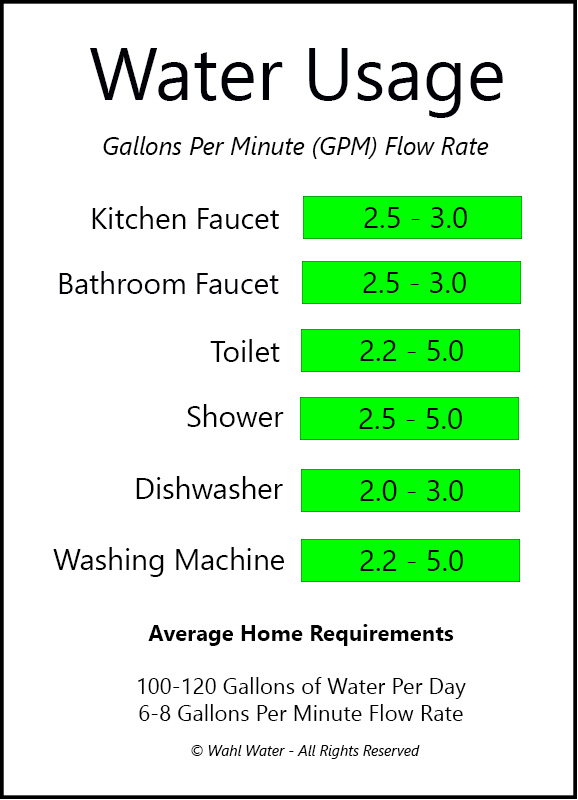 “Natural sources of hardness in water are sedimentary rocks and seepage and runoff from soils.” is the explanation of the origins of water hardness according to the CDWQG. In general, hard water originates in areas with thick topsoil and limestone formations. Groundwater in deep or shallow wells is generally harder than surface water.
Experience #3 - Drilled Well with Unusable Water
The third example involves a customer who was concerned about the quality of their 120 foot drilled well, but only after the well driller indicated that it should be tested. This was due to the yellowish orange colouring and the odour emanating from the water after it was drilled. Water sampling revealed ferrous iron present with a value of 6.7 ppm. Ferrous iron is particulate based and the recommended levels are below 0.3 ppm according to the CDWQG. The level of hydrogen sulphide (sulphur) present was 3.9 ppm whereas the CDWQG recommended guideline consists of <0.05 ppm. Further testing revealed a water hardness level of 109.4 grains and a TDS level of 6457 ppm. This adverse well was not easily treatable due to the low flow rate of 1.0 gallons per minute and low overall capacity. The well was abandoned and condemned. The customer sought an alternate water source from the lake, by necessity and not choice.

Properly testing a dug, shore or drilled well before purchasing a property or installing any equipment can prevent surprises, illnesses or additional costs once you take possession of a home or cottage. The requirement for real estate purchases should include proper water sampling, which adheres to the minimum and maximum levels of various substances set out in the Canadian Drinking Water Quality Guidelines. The common test for bacteria is not enough to identify other potential, known or emerging contaminants in rural water supplies. It is not comprehensive enough to know overall that a water supply is safe for use and consumption 365 days a year.
Property owners should be able to know what they’re getting with full disclosure, and not stumble upon a grave water issue by chance. Water safety is important, and the best way to ensure that safety is a full scale water test conducted by a professional.
Volume 4 – Issue 6 Wahl H2O - Water Awareness
Copyright 2020 Jeff Wahl – Wahl Water | All Rights Reserved
Contact Jeff via email [email protected]
Previous Post
Next Post